The Green Deal called all European Union countries to a concrete commitment to decarbonization, punctuated by ambitious environmental targets: to reduce CO2 emissions by 55 % by 2030, compared to 1990 levels, and to achieve carbon neutrality in 2050.

In 2020, in a letter that has already entered history, Blackrock CEO Larry Fink made it clear that climate risk is now a real investment risk. More, in 2022, even after two pandemic years, he stressed that the most interesting UN goal is No. 13: to promote actions, at all levels, to combat climate change.

The cement industry: a key sector in the ecological transition.

Cement is the most widely used construction material in the world, the second material only after water. Clinckerization, a chemical process essential to produce it that takes place inside kilns that reach temperatures over 1,450 °C, burns large amounts of fossil fuels and emits large amounts of CO2. Aware of its key role in the process of the ecological transition and the fight against climate change, the cement industry is getting in on the act.

The industry-leading Heidelberg Group has publicly pledged to produce carbon-free, zero-carbon cement in 2050. Is this an achievable goal? Theoretically, yes. Some solutions are already available, others under study. 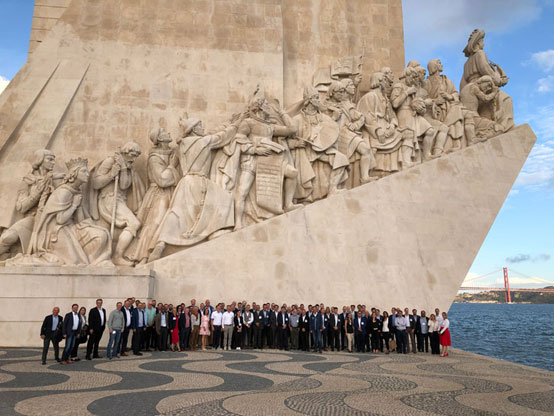 The biggies gathered in Lisbon at the 15th CemFuels.

There are many possible strategies to help cement industries decrease their carbon footprint. Reduce energy consumption by improving plant efficiency and optimizing fuel mixes with adequate amounts of alternative fuels. Innovate products, using lower-impact raw materials, for example by decreasing clinker or using materials from other production processes. But also implement technologies to innovate the combustion process, making use of hydrogen and intervening downstream to capture and store CO2 emissions. All this was discussed in September in Lisbon at the 15th edition of CemFuels, a world conference and exhibition dedicated to alternative fuels in the cement industry. In the presence of delegates from more than 35 countries, the costs of this transition, which to be truly viable will also have to be sustainable for companies’ profit and loss accounts, were also discussed at length. And one thing became increasingly clear: unlike many other technologies that are still being studied and are still very expensive, reducing dependence on fossil fuels is one of the key solutions to drive this industry toward carbon neutrality. A cost-effective solution that is already proven and ready to be implemented.